“When I set my mind to something, I have to do it.”

So-says James Wright in a recent interview following his monumental challenge attempt. James was aiming to run 145 miles in one go on Saturday 11th January, in what is considered the toughest ultramarathon in the UK – the length of the Grand Union Canal from Gas Street Basin in Birmingham, to Little Venice in London. His attempt was cut short after 90 miles due to a broken-down support vehicle, but the determined runner was never going to leave the task unfinished.

This Sunday (2nd February), James will be completing the unfinished 55 miles of his canal-side challenge by starting out of Birmingham at 5am. 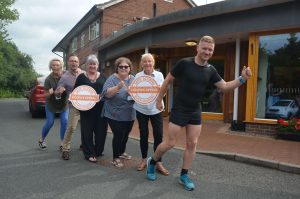 At approximately 27 miles, James will turn back towards Birmingham and complete the remaining miles, ending with a triumphant finish in front of friends, family and supporters at Gas Street Basin at around 3pm.

The epic run is in aid of our Save Acorns Black Country Hospice Appeal – raising money towards the £2 million needed to secure the future of our hospice in Walsall for the more than 200 children and their families that rely on its care.

James’s fundraising will be enough to take the Appeal to £600,000 – more than a quarter of the way to the £2 million target – thanks to an incredible pledge of £15,000 from Dudley Rotary Club and James’s JustGiving page which is approaching an impressive £3,000.

Speaking about his motivation for this challenge, the father of two, who fosters children with his partner Gemma said: “It’s a hospice my wife Gemma and I know very well. A child very close to our hearts used this amazing service. We know first hand what Acorns provides. For 233 families – many with nowhere else to turn – Acorns is a lifeline. Without it they’d be lost. Life’s challenges would be intense, and in some cases too much to bear.”

“145 miles, although it’s a lot, really doesn’t compare to the challenges that many families face. On life’s journey – Acorns is alongside you as a family. Creating those precious moments to treasure and that support that keeps you going. It’s a service we cannot lose and that’s the thought I’ll keep in my mind when things get tough on Saturday.”

The ultramarathon challenge comes hot on the heels of James’s incredible 31 marathons in 31 days, completed last August which raised over £7,600 for the Appeal. Over the course of the month James completed 26.2 miles every day – a total of 812.2 miles – running some days after finishing work in the evening.

“If you’re reading this and feel inspired – please donate, please do something to help support this Appeal. You don’t have to do something as ‘crazy’ as 145 miles in one day – but every amount, large or small is vital.” – James.